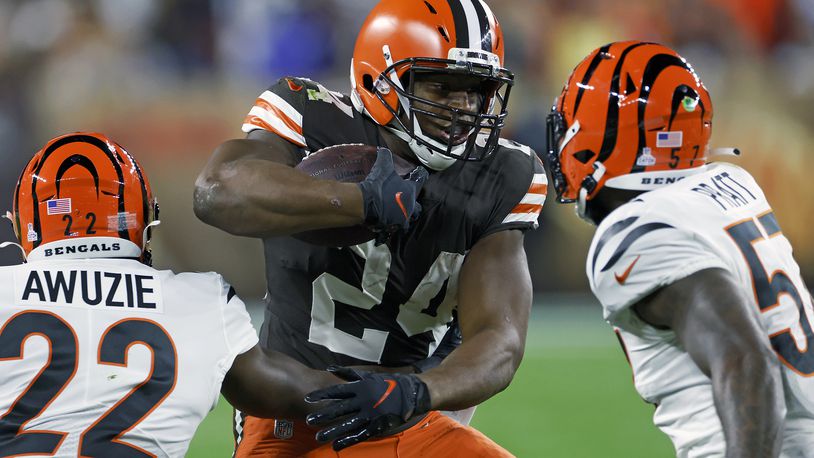 The AFC North landscape may have shifted a little this week.

The 2022 NFL trade deadline struck at 4:00 pm yesterday, with the Steelers and Ravens both having engaged in the busier-than-usual market.  The Ravens acquired a much-needed (if ultimately expensive) MLB in Roquan Smith from the Bears, while the Steelers bolstered their draft stock by unloading WR Chase Claypool to those same Bears, later adding CB William Jackson III from the Commanders for negligible draft compensation.  The Browns weren’t able to move RB Kareem Hunt as they were expected to, and the Bengals held pat, still confident that their last loss isn’t indicative of the team’s ultimate 2022 outlook.

Will it matter?  Like all post-trade evaluations, we’ll just say “we’ll see”.

In the span of four quarters, the Ravens effectively showed how simultaneously frustrating yet captivating they can be.  After a dismal first half that saw the them trailing 10-3, the Ravens scored 24 points in the second, taking the lead late in the third quarter and, for a pleasant change, not relinquishing it.  QB Lamar Jackson was 8-8 with two TD passes in the second half, aided by a resurgent rushing attack that averaged 7 yards per carry in accumulating 231 total yards, including 204 in the second half alone.  The defense, after looking shaky early, also rallied to quell any resurgent activity by longtime NFL tormentor QB Tom Brady, who, at 45 and mired in personal turmoil, finally looks flawed…and perhaps human after all.

The education or ritual abuse of rookie QB Kenny Pickett continues. depending on how you view his getting sacked six times with little support from his offensive line.  The Steelers were simply unable to defend the Eagles’ passing combo of QB Jalen Hurts to WR A.J. Brown, who had six receptions on the day, including three for TDs. Steelers RB Najee Harris’ lagging output isn’t helping; although he averaged an acceptable 4.0 YPC in this game, his season average of 3.3 YPC and his lack of drive-to-drive consistency remain problematic, especially when UDFA backup RB Jaylen Warren continues to outshine Harris in limited use.  The defense…well, the sooner Edge/OLB T.J. Watt returns, the better for this embattled unit.

In the first “Battle of Ohio” to be posted this season, the Browns decisively won, mostly on the strength of DE Myles Garrett’s dominating performance and the forward momentum of RB Nick Chubb, who rushed for 101 yards and two TDs.  Garrett played his best game since returning from a car accident he suffered last month, posting 1.5 sacks and applying near-constant pressure to Bengals QB Joe Burrow, often disrupting plays in the backfield before they had a chance to develop.  The rest of the Browns defense held firm, limiting Burrow to 193 passing yards while adding five sacks overall (including Garrett’s 1.5) and an interception.  Offensively, the Browns moved the ball relatively easily against a normally stout Bengals defense; Chubb effectively ran the ball from the outset, enabling the play-action passing game to take hold, allowing for five catches, 131 yards and a TD for WR Amari Cooper.

The Bengals don’t have much to be excited about after this loss, especially the performance of the offensive line, who allowed Garrett to roam freely throughout the game and provided little additional support in their middling rushing attack (10 combined rushing attempts for 36 total yards).  As mentioned, QB Joe Burrow was under pressure a good deal of his snaps, resulting in forced passes and an uneven pocket, none of which was helped by the absence of star WR Ja’Marr Chase due to injury.  The Bengals played credible defense in the first half, but collapsed in the second under the weight of Cleveland’s rushing attack and subsequent passing opportunities.  The Browns clearly won the proverbial “chess match”, as the vernacular goes.