Greetings, Knowledge Seekers. The Real BKOB Report has returned to eliminate the Earth’s misery!! Consult a physician if your Golden Boner lasts more than four hours!!

When last we convened, the Seahawks were first place in the NFCW.[1] Then I left for New Zealand, so everything after that is stricken from the Knowledge Record. It’s not official if it’s not in the Knowledge Tables: SKA policy!!

During my hiatus, the entire planet descended into madness and chaos. No big surprise there. Many readers, pundits, heads-of-state and Knowledge Officianadoes have credited ME with predicting the Collapse of Reality back in 2017, when the Seahawks missed the playoffs.[2] We are now seeing the end results of that cataclysm. This is all your fault, Blair Walsh!!

The future of NFCW Football appears to be secure… for now. But the surviving SKA users are forced to live in a world without preseason. DARN YOU, WALSH!! Fortunately, I have the next best thing: Time Travel.

That is correct, Knowledge Seekers: I’ve used my mastery of NFCW Stats and Rankings to assemble a functioning Time Machine in my dad’s Knowledge Bunker. And, what’s more, I’ve collected all of the best teams in the history of the NFCW in order to make them injure one another for my amusement!! Now THAT is what I call “Fantasy Football!!” Join me, won’t you?

Let’s meet the participating teams, representing each franchise in today’s NFCW against their wills.

1999 St Louis Rams: “The Greatest Show on Turf.” What more needs to be said? They barely beat Jeff Fisher and all of their team records on Offense were broken by the 2013 Broncos (we all know how that worked out.[3])

1988 San Francisco 49ers: Yes, I know the ‘84 team had a better record, and I don’t care. That team didn’t even have Jerry Rice, so I’m not wasting any Time Machine fuel on them. The 1988 Roster (Montana/Young, Rice, Lott, Haley, Craig, etc.) and the Coaching Staff (Bill “Don’t Call Me Blair” Walsh, George Seifert, Mike Holmgren, Dennis Green, etc.) make them my choice to represent the 49ers in this here tournament. Besides, it’s my article and Keal says I can write whatever I want.

1925 Chicago Cardinals: Little is known about this team, because the fossil record from that era is incomplete. DNA evidence suggests they were related to the hunter-gatherer peoples who migrated into the midwest when the ice caps receded. Their star Fullback was OSS.

2013 Seattle Seahawks: This was not an easy choice to make, Knowledge Seekers. The 2020 squad demanded serious consideration, but when I arrived at the VMAC with my Time Machine I was told to vacate the premises. They’re a finicky bunch, over there.

The 2013 Seahawks Defense finished the season ranked 1st in Fewest Yards Allowed, Fewest Points Allowed and they had the Most Takeaways – the first team since the ‘85 Bears to pull off the Trifecta. They also finished 1st in Passing Yards Allowed, Passer Rating Allowed, Interceptions, Passing Yards Per Attempt, Passing First Downs Allowed, and they allowed the fewest Rushing TDs.

That last paragraph was so impressive, I’m going to post it again.

The 2013 Seahawks Defense finished the season ranked 1st in Fewest Yards Allowed, Fewest Points Allowed and they had the Most Takeaways – the first team since the ‘85 Bears to pull off the Trifecta. They also finished 1st in Passing Yards Allowed, Passer Rating Allowed, Interceptions, Passing Yards Per Attempt, Passing First Downs Allowed, and they allowed the fewest Rushing TDs. Stupendous!

In addition to all of THAT, they allowed the 2nd fewest Passing TDs, the 3rd fewest Total First Downs, had the 3rd most INT Return Yards and the 5th most Forced Fumbles. Basically, they had no weaknesses, and they will probably win this tournament.

The 2013 Team also had an offense anchored by “Beast Mode” Marshawn Lynch in his prime, along with Doug Baldwin, Golden Tate, Percy Harvin, future HOF QB Russell Wilson, and Time Machines are AWESOME! I’m not sending these guys back!!

Oh, Knowledge Tables, how I have missed you.

Round One – ‘88 49ers vs ‘25 Cardinals:
A sloppy endeavor ensues when the 49ers agree to ditch their face-masks and use a 1925 regulation ball, made from dried mastodon droppings. I’m not sure who negotiated that one. Dazzled by the potency of the new fangled Forward Pass, the Cardinals call for a pass late in the 3rd quarter – but OSS’s errant ball sails into the stands, striking President William McKinley in the abdomen. Though the President’s wounds were minor, he would die from them eight days later.
Final Score: 49ers win, 16-4

Round One – ‘99 Rams vs ‘13 Seahawks:
This one wasn’t pretty, folks. Pete Carroll-coached teams have a knack for defeating #1 Offenses and League MVPs[4]. Today was no different. Kam Chancellor had to leave the game before halftime to have a portion of Marshall Faulk’s femur removed from his face-mask. The Mike Martz Turnover-Machine Offense plays directly into the Legion of Boom’s hands.
Final Score: Seahawks win, 43-3

Final Round – ‘88 49ers vs ‘13 Seahawks:
All of that QB depth didn’t help the 49ers in this one. After Steve Young was carted off the field in the 4th Quarter with a Ruptured Toupee, Steve Bono begins to warm-up. Just then, Joe Montana hobbles into the building, having just escaped from the nearby Emergency Room. He tosses his crutches aside and boldly takes control of the 49ers’ huddle. The finest 1980’s montage music plays as Joe Cool artfully leads his team down the field in the closing minutes of yet another Championship Game. He connects with Jerry Rice in the end zone with only a few seconds left in regulation. 4905 twirls his mustache with delight. Unfortunately for him, the Seahawks still have a 22-point lead. Percy Harvin returns the ensuing kickoff for a Touchdown.
Final Score: Seahawks win, 42-13

Wow, it doesn’t get more definitive than that. Just another entry in an endless string of daily reminders that, apart from the occasional 10-6 “rebuild” year, the Seahawks will own this Division forever.

But before I put the Time Machine into storage, there was one last thing I had to do, Knowledge Seekers. Here’s a screenshot from a random Sports Illustrated article back in July of 2013. #RIP Bader 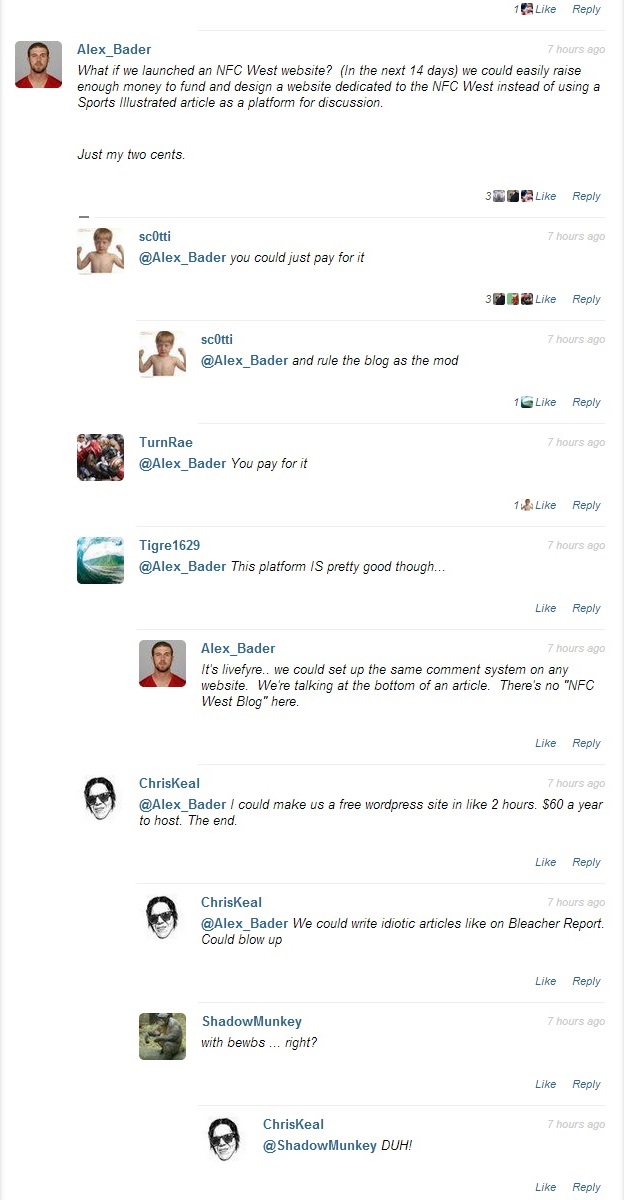 Little diddy, ’bout Bader and Keal
Two degenerate pricks fed up with ESPN’s deal
Bader wants to be a Sports Blog star
Keal secretly hates football, thanks to the Cards

Oh, let it rock, let it roll
Let the BKOB Report come and save my soul
Holding off the Chinese as long as we can
Bots coming ‘round soon
Makes us swimmin’ in spam