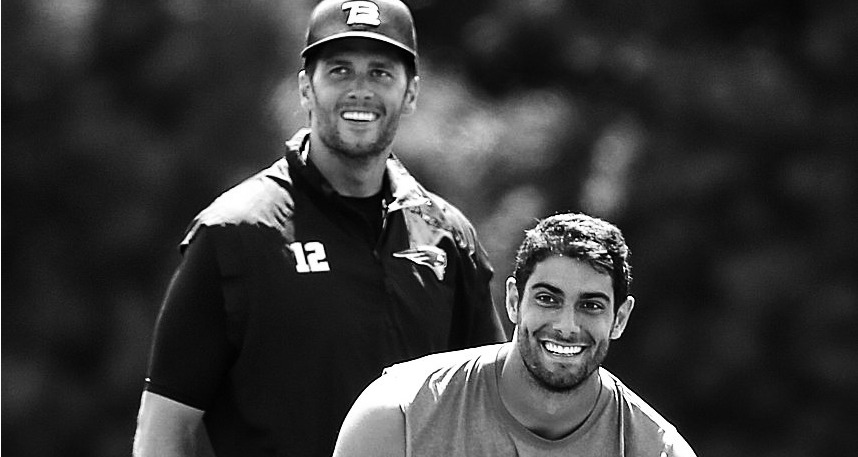 Trolling injuries it NOT COOL, you guys! And I’ll have no part of it…

I don’t believe Niner fans deserve immunity after heaping such laughably-high expectations upon an unproven, noodle-armed, Game-Managing QB. Particularly because Jimmy was a miserable-failure-in-progress LONG BEFORE his bone-headed decision making ended his season. And I can prove it.

Now, if we learned anything during yesterday’s “Stages of Grief” marathon, it’s that Niner fans must be handled delicately. After all, they have had a rough go of things these past 20 years or so. But with great Knowledge comes great responsibility, so it’s up to me to guide them through this latest colossal disappointment. That’s right, Knowledge Haters, I’m here for you!

Sure, a cursory glance at Jimmy’s final stat-line (59% completion, 5TD, 3INT, 90 passer rating) might suggest that he played “ok.” But you see, THAT’S the problem – He wasn’t supposed to be “ok.” He was supposed to be “GOATroppolo“, the unstoppable superstar/mega-Franchise QB who led the league in Field Goal Drives for five whole weeks and signed the biggest contract ever, and makes all of his teammates better (even the Defense), and whose presence would single-handedly shift the balance of power in the NFL away from Foxborough and toward Santa Clara. Those were the expectations that Niner fans set for him after his first five starts.

That is NOT who we saw this season. If we dig deeper into that “ok” stat-line, a more troubling picture emerges. And it’s Tuesday Morning, so let’s start digging!!

Heading into half-time of that Chiefs game, the 49ers were trailing 35-10, Jimmy was throwing air-balls all over the field, and a 1-2 record was essentially in the books (with their only victory coming via Referee Collusion after Jimmy’s terrible Pick, which should have cost them the Detroit game). At this point, Jimmy had led the 2018 49ers on 31 offensive drives. Two of them were kneel-downs before time expired. Of those remaining 29 drives, 24 of them ended in either a Punt, a Turnover or a Field Goal – including 7 3-and-Outs… What happened??

Sure, Jimmy put together a few decent drives in garbage time against a bad KC Defense, but that still didn’t help his overall numbers. Through three weeks, Jimmy was ranked 18th in Passing Yards, 16th in Passing TDs, 18th in Passer Rating, and 28th in Completion Percentage. OUCH!!

All of this despite playing alongside a RB who has been on fire, and an Offensive Line that has shown signs of improvement. Most Quarterbacks would consider those to be ideal circumstances, but Jimmy was not able to capitalize. Now he’s not even a Game Manager!!

The worst part of it all, Knowledge Seekers, is that Jimmy seemed to buy into his own hype – on AND off the field – which may have ultimately led to his downfall. He seemed to crave the attention that comes with being “Baby Brady.” But his decision-making skills were somewhere between Matt Leinart and Robert Griffin the III. All you can do is shake your head.

Now, about those Niner fans. Do you think I’m being unfair, and over-exaggerating the hubris of the Faithful? You must be new here.

But just for fun, here are some of my favorite examples of outlandish, unrealistic predictions that Niner fans made during the off-season. And, through the magic of on-screen pushy buttons, you can scroll through them and re-live the silliness! A special thanks to Ras, Lisa and sc0tti, for making this Golden Boner Award-nominated article possible – You da real MVPs!!

Heavens to Betsy. It appears our Niner Fan friends may have overrated a guy who had 6 TDs and 5 INTs in those five starts in 2017. If they only knew how much worse he would get…

So what is the point of this article? Niner fans will play the victim-card and insist that I’m trolling an injury, even though I’ve barely mentioned it. I’m not here to mock an injured player, but to mock a foolhardy fan-base that continually throws their blind faith toward unproven players who occasionally show flashes of mediocrity. Plus, I’ve been saving these screenshots for months and I didn’t want them to go to waste. So let’s all get together and kick the Niner fans while they’re down! They’d do the same to us!!

Franchise QBs don’t just fall from the sky, so it’s actually disrespectful when you compare an unproven, career-backup like Jimmy to a proven-commodity like Tom Brady or Russell Wilson – guys who have already shown their on-field production over a long period of time, AS WELL AS their toughness and durability. It’s a rare combination, you know!

Sure, Jimmy will be back next year, and he might play well and help the Niners improve. But when he comes back, PLEASE REMEMBER that he is unproven, and we should temper our expectations accordingly. PAYING somebody like the GOAT, and HYPING THEM UP like the Goat, doesn’t actually MAKE THEM the GOAT.