The world of mediocre football was ROCKED this past weekend by the surprise retirement of Andy “Jay Cutler Jr” Luck – the greatest human of all time. With nothing left to prove, he stepped away from the game just two weeks before the 2019 season kicked off, and less than a week before his 30th birthday. The tremors have rippled throughout the league, even as far as the NFCW.

But don’t you dare criticize Andy Luck – not even a little bit (1). Seriously, don’t do it (2). The Fake Knowledge Media is still very protective of their golden calf. They demand privacy and respect during this time of grieving.

Andy’s career accomplishments are mostly hypothetical, but even so they are impressive.

In college he led the Stanford Cardinal to zero Pac 12 Championships and his only bowl victory was over VA Tech. But he wasn’t done there. In 2010 he achieved Eternal Legend Status by finishing 2nd in Heisman Trophy voting, narrowly losing out to Cam Newton by a 1st-place vote margin of 729-78. This bulletproof resume led NFL scouts to unanimously conclude that he would be the greatest Pro QB ever, and analysts spent TWO YEARS in an over-hype arms race (3) before he finally entered the league as the #1 Pick of all #1 Picks.

Andy’s talent was so obvious and unquestionable that Peyton Manning gleefully stabbed himself in the back to make room for the young hero. The tired old Sheriff, having clearly been bested, shuffled off to Denver to wile away his autumn years in peace and obscurity, where he broke all the NFL passing records, won an MVP award, two AFC Championships, and a Super Bowl. Clearly it was time for Indy to move on.

From there, Andy would go on to compile the 2nd best stats of ANY QB through their first six years, and it only took him seven years to do it. Even while playing in the famous, fabled AFC South – the most brutal and competitive Division on the planet – Andy still managed to make the playoffs occasionally. Don’t ask about his playoff accomplishments, though. It’s rude. The point is that Andy proved he could hang with the Titans of the sport. The Tennessee Titans.

In 2014 he finished 2nd in Turnovers behind his hero, Jay Cutler. He went on to become an AFC Finalist, completing 36% of his passes in the Championship game, with 2 INTs and 0 TDs. The Colts lost by 38 points, but Andy Luck had already won our hearts.

In his final game Andy managed to do the impossible, becoming the first QB in 25 years to lose a playoff game in Kansas City. The Chiefs’ highly touted #31 ranked Defense managed to hold Andy’s team to 13 points, despite the fact that he is amazing. This was Andy’s 4th playoff loss, all of them by 3 scores or more.

Having accomplished all that he had set out to do, Andy Luck – the face of the NFL, nay, the World – was finally ready to pass the torch to the next great generation of quarterbacks.

So now that the fog of war has cleared, and the final horn has been blown, we can step back and take a look at Andy’s remarkable career in its entirety. The time for speculation is over. Instead of holding our breath for nine years waiting for Andy to reach his mythical ceiling, we can finally exhale and examine how his vast accomplishments stack up against those of his peers. So now, without further Adu, I give you the definitive statistical comparison that you’ve all been waiting for. 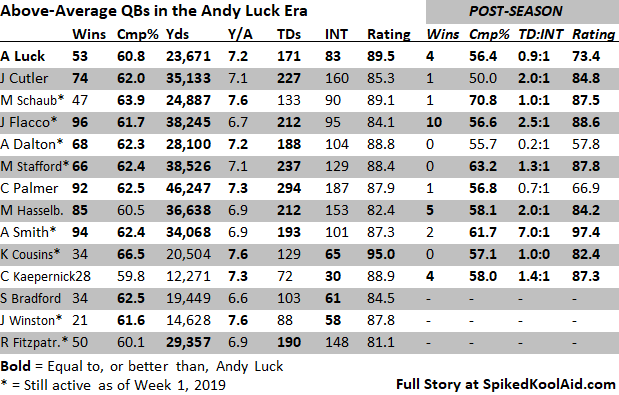 Amazing. The Hall of Fame voters will have a lot of tough decisions to make when this logjam hits Canton in another 5 years or so.

Some will argue that it’s unfair of me to compare Andy’s stats against the likes of Cousins, Dalton and Flacco. Those lofty expectations are too high, even for the best Pro QB of all time. But this is where the Andy Luck conversation ends. If we don’t draw these comparisons now, when will we?