WHY THE LAST JEDI SUCKED SO INCREDIBLY AND HORRIBLY BAD 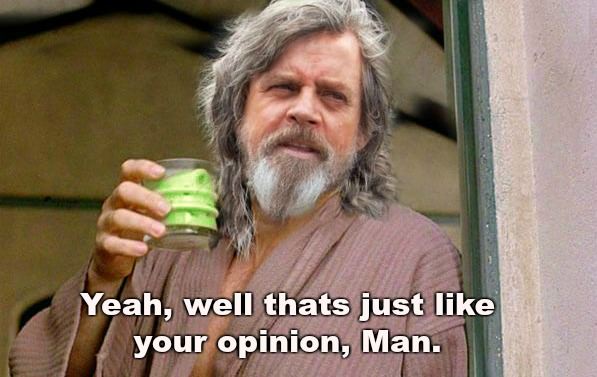 Let’s start off at the very beginning of the movie: the opening scene. Rian Johnson couldn’t possibly start the movie off so poorly that you could almost tell from the jump that the movie was going to suck, could he? Yep. I probably shouldn’t nitpick too much or I’ll have to make this a series, so I won’t harp on things like General Hux needlessly explaining to his crew that he has “orders from Supreme Leader Snoke himself” to wipe out the Resistance. Besides, I’m sure all generals assure their subordinates that they aren’t winging it and their orders are coming from the very top. So we’ll just skip over that wonderful dialogue and jump to what everybody loves most about Star Wars movies: the humor.

There’s nothing like a terrible and juvenile joke to start a space drama. The First Order is in position to attack Resistance forces evacuating their base when a lone ship appears in front of them containing Poe Dameron. After Poe hilarious says he has an important message for General “Hugs”, Hux goes on to say something about wiping out all Resistance scum, to which which Poe replies that he’s on hold for General “Hugs” again, describes him as a skinny pasty guy. This continues for a little back and forth until another First Order dude has to tell Hux that he’s being messed with and Poe throws in his final jab that the message is from Hux’s mother. A mom joke in the opening scene. Brilliant.

But the opening scene isn’t done yet! Despite orders to fall back, Poe decides to unleash the Resistance’s secret weapon: the slowest and most inefficient bombers you could possibly imagine. This is the same space series that has light speed and blasters that shoot lasers, right? The bombers contain a whole bunch of bombs (duh) that have to be dropped straight fucking down out of a shaft on the bottom of the ship, meaning they have to be directly over their target. Oh, and they have no shields. Because why would they? The bomber fleet gets slaughtered, but of course one somehow finds a way to reach its target area. How else would they set up the death of the sister of one of the worst characters in the movie? They blow up the First Order ship, while also blow themselves up. But Poe is fine and as we find out later, he makes it back to the main Resistance fleet only to be tracked by the First Order. A lot of good that whole scene battle did.

After a quick scene where Finn wakes up and fumbles around for some more humor, they jump to Rey and Luke on the island where Rey is still holding out Luke’s old light saber and hasn’t given it to him yet. We’ll ignore that this doesn’t make any sense from a timeline standpoint and instead focus on what Rian Johnson decided to do with JJ Abram’s dramatic ending scene to the Force Awakens (which Abrams actually changed because Johnson asked him to).

Luke never says a word in the Force Awakens. Rey finally finds him at the very end of the movie and it ends with her holding out Luke’s original light saber while dramatic music plays. The same light saber his father, Anakin, Darth Vader, whatever, built and Obi Wan gave to him in a New Hope. When we return to this scene after 2 years in the Last Jedi, Johnson decides it’s a good time for another awesome joke. Why take the end of Abram’s movie seriously after you made him change it? Apparently, Abrams originally had Luke using the force to levitate boulders when she arrived at the island. I guess Johnson wanted to steal that idea and use it for Rey at the end of his terrible movie. Anyway, as Luke takes the light saber, the music starts to become more and more intense until…..drum roll….the music stops and he tosses the light saber over his shoulder and walks past Rey without saying a word. Jesus fucking Christ.

I was kidding above about making this a series (and I won’t), but this is just the first 15 minutes or so. Seriously. The movie is 152 minutes long and doesn’t get any better. And yes, I realize how much of a nerd I am for writing this. You hate to see it.