MHB: Kneel Before The Greatness Of Aaron Godgers, Scum 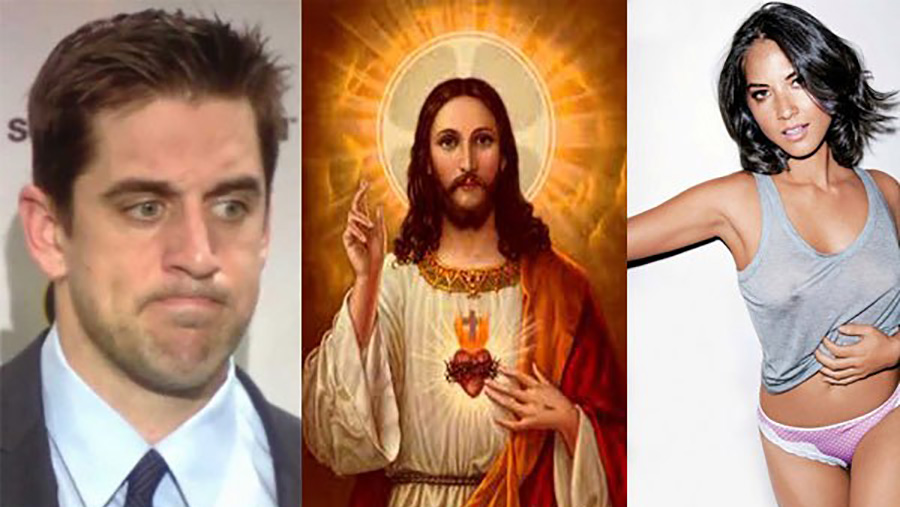 We’ve all heard what the critics are constantly saying about Aaron:

“This dude always has poontang on his mind and not the playbook.”

“Maybe if he stopped fucking hot bitches for 5 seconds, he’d have more than 1 Super Bowl.”

Blah, blah, whatever, Skip Bayless.  His constant and unrelenting heterosexual sexploits are none of our business.  It’s time to focus on football, because that’s what I bring to the table.  I think we’re all tired of the gossip rags going on and on about the latest chick-of-the-week who had her vajayjay stretched beyond repair by Rodgers’ MVP-caliber dong.

In the history of the NFL, a relative handful of QB’s have managed to hit 300 TD’s for a career.  Aaron is now the 11th, except he’s done it far more quickly than anyone else in history.  About 600 fewer attempts, in fact.

At the point these Legends of the Game threw their 300th TD, NO ONE had less than 100 INT’s.  UNTIL TODAY.  Rodgers has 74.  74!  Dude.  That’s, like, way fucking less.  70 something less than Brady at least.  Which is a lot of percents better.  It’s basically completely fucking insane and will only be broken by some sort of cybernetic robot from the future. SPOILER ALERT:   PassTron 5000 is going to play for the Packers, too.

Look, fuck your quarterback.  He isn’t breaking these or even coming close.  Matt Ryan currently has 242 TD’s, so he’ll break the 300 TD barrier at some point unless full-blown AIDS derails his career.  It’s a pity he already has 114 INT’s though.  Carson Palmer has 287 TD’s and 184 INT’s.  I’m guessing he hits 300 INT’s first.  I tried to do the calculations on Russell Wilson, but my computer blue-screened trying to project when this bubble-headed pygmy preacher would actually reach 300 TD’s.  That one’s on me for not adding more RAM.  If there’s another current player I’m forgetting it’s because he sucks and he’s forgettable.

Before I forget, I want to thank Nav for writing that lovely tribute to George Michael on my behalf.  Thanks again, buddy.  I didn’t have time to read it but the picture obviously said it all.  I wept like a goddamn baby, you can be sure of that.  You’re a true friend and a prince in this cesspool we call a blog, which we continue to let Ballon Knot pay for single-handedly.

I hope everyone reading this learned something today about Aaron Rodgers, and maybe about themselves.  I know the natural response is to look at your team’s QB and be angry with him because he’s not doing Aaron Rodgers Things.  But don’t be.  Your goofy retarded bitch is trying his best, which makes us Packer fans laugh a derisive, mocking, arrogant laugh.  So much laughing.  The last thing I want is to make you upset.  Remember that!

I love you all.  Now fuck off and get to kneeling before Rodgers, scum!